Control of motor torque and velocity or speed are operating mode selections available to most basic DC drives and to some flux vector type AC drives.  With some products, Velocity mode operation can include capacity for regeneration.

The armature voltage is unregulated allowing the motor to operate at whatever speed is necessary to achieve the set current /torque level.  Such a set-up may be used for any constant torque drive rolls and simple winders to adjust approximate tension for small build ratio centerwind operation.  For torque mode center winders and a fixed input reference, torque remains constant giving a taper tension effect unless the machine operator increases the torque set-point as diameter increases.

Straight torque control can have the undesirable effect of causing run-up to maximum speed in the event of web breakage or load loss unless the drive includes a “Max speed or voltage limiting” function..  These effects can be compensated for by optional drive add-on boards and/or external control circuits to give full featured “constant tension center wind”, CTCW, control with included compensation for friction, inertia, diameter change and more. Some drives such as the Carotron ELITE PRO, digital DC drive, include CTCW firmware.

An AC drive uses complex processing of motor voltage, current, frequency and rotational position to give it torque regulation capability.  TORQUE mode operation usually requires encoder feedback.  Even evaluation of an inverter drive’s torque regulation ability is not a straightforward task.  Do not assume that an inverter and motor operating in “torque” mode will produce a linear and proportional output torque versus reference.  Complete torque control may be dependent on the use of an external torque reference circuit or control that has flexibility and adjustability to compensate for any drive/motor shortcomings.

To regulate DC motor speed, the drive will normally control the armature voltage.  How well it does this depends on what feedback signal is used to represent the motor speed.  Refer to the Section C, “Open Loop and Closed Loop Control”.  Common selections for some DC drives are as follows:

The armature voltage feedback method, also called armature feedback, relies on the ability of a DC motor to act as a DC generator.   When a DC motor is rotated, it will generate a voltage level called counter or back emf that is proportional to the speed of rotation.  As on all “generators”, the generated output is also affected by the strength of the field magnetic flux. 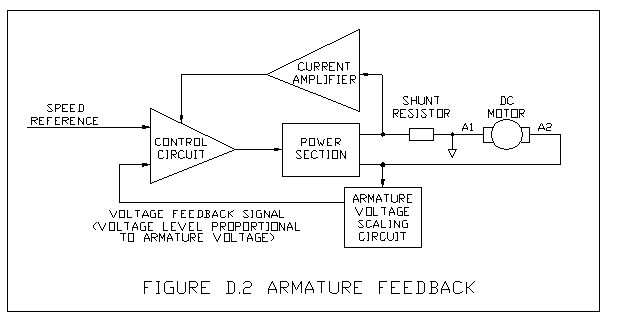 Since the armature voltage coming from the drive is output in the form of pulses, the counter emf voltage can be measured in between the pulses.  This signal is then introduced to the speed regulation circuit of the drive, the Velocity Loop, to adjust the drive power section to maintain a constant motor voltage.  The primary benefit of armature feedback is that (with Carotron DC drives) no additional drive or motor components are required.

Some problems associated with Armature Feedback operation are related to certain DC motor characteristics.  One problem is, even with constant armature voltage the motor speed may drop several percent when the motor is loaded.  This drop is due to “internal resistance” losses in the motor armature and is addressed on DC drives by the addition of a “internal resistance compensation”, IR Comp, pot and signal.

The IR Comp circuit senses load increase and then increases armature voltage to prevent speed droop.  Unfortunately, the effect of IR losses is not usually the same over the motor speed range and a specific IR Comp setting works best at a specific motor speed.

Another problem with Armature Feedback relates to the motor operation as a “generator” and how that is affected by the field magnetic flux strength.  On the wound electromagnetic field(s) of Shunt Field motors, temperature increase as the motor warms up (immediately after power up) will cause the field winding resistance to increase.  This causes a decrease in field current and flux strength which in turn causes a decrease in generated voltage which when used as velocity feedback causes an increase in motor speed as the drive tries to maintain a constant armature voltage feedback.

The influence of shunt field strength on DC motor speed and torque can be used to advantage in some applications – primarily known as “CONSTANT HORSEPOWER” applications.  In these applications, speed can be “swapped” for torque to deliver high torque at low speed and high speed at low torque.  A Velocity Mode Center Winder is an example application where low torque and high speed are required on a beginning roll and as diameter increases; rotational speed decrease is accompanied by an increasing torque requirement.  In higher HP applications using specially designed motors, usually > 5 HP, control of the DC motor field can be provided by the drive or by an independent FIELD REGULATOR.  Refer to Section H. Constant Horsepower Winders for more detailed description of this type of operation.

Permanent magnet, PM, field motors do not experience the “field flux change” phenomena but can still exhibit the IR losses.   So, armature feedback operation is less costly but, the potential associated problems may be prohibitive if precise regulation over the motor speed range and drift-free operation is required.  The way to eliminate these potential problems is to “close the velocity loop” by use of an external feedback device such as a tachometer or encoder.

Tachometers and encoders are devices that give a precise output that is proportional to their speed of rotation.  Use of such a device for feedback is called “closed loop operation”.

Tachometers (also known as Tachs or tach generators) are varied and are rated in Volts-per-1000RPM.  Most of them supply a DC voltage output but, AC voltage rated units are still available and used.

Some standard DC ratings are 7, 50 and 100 VDC/1000RPM.  Standard AC ratings are 45 and 90 VAC/1000RPM.  The AC tachometer output changes in frequency and voltage level with speed change.

Encoders come in an even larger variety of ratings and output a signal that increases in frequency with speed increase.  They can be specified with multiple outputs called quadrature outputs and marker pulses which permit them to feed back direction-of-rotation and rotational position information.

Some encoders are referred to as Pulse Tachs or Pulse Generators.  These are usually “ring and gear” or “Hall sensor and Magnet wheel” arrangements that mount to a “C” face or flange on the motor.  All encoders are specified in Pulses-per-Revolution or PPR and may have output ratings from 1PPR   to thousands of PPR.

Tachometers and Encoders include ratings for output accuracy or tolerance, supply requirements, temperature range and load range.  Their main claim to fame is that they ignore most external influences and give an accurate and repeatable output as long as they’re operated within their defined ratings.  This means that drives using them for feedback also can ignore or compensate for factors including motor losses, line voltage fluctuation, load change and temperature change.

AC Inverter drives can have several selectable control methods.  Some examples are:

B.) V/F Control with PG or Tachometer Feedback

A.) The V/F, voltage/frequency, Control method – also called Volts-per-Hertz control is the most common inverter control method.  Requiring no feedback device, it is suitable for general purpose and multiple motor applications.

B.) V/F Control with PG Feedback gives the better speed regulation of a closed loop system.

Inverters and their motors can also be operated in a “Constant Horsepower” profile where motor speed can be extended beyond the base speed rating with torque capacity de-rating.  Refer to Section H.12, “Constant Horsepower Winders” for more detailed description of this type of operation.

Regeneration relies on the ability of both AC and DC motors to act as generators as well as motors.  Regeneration is an operating mode that is automatically implemented by a REGEN drive’s velocity control section whenever the velocity feedback is greater than the velocity reference.  With regenerative drive capacity, a motor can provide motoring (positive) torque or braking (negative) torque, usually in either direction of rotation.  This is called “four quadrant” operation.  Non-regenerative drives provide only “single quadrant” operation although the addition of reversing contactors with DC drives can allow motoring operation in the third quadrant. 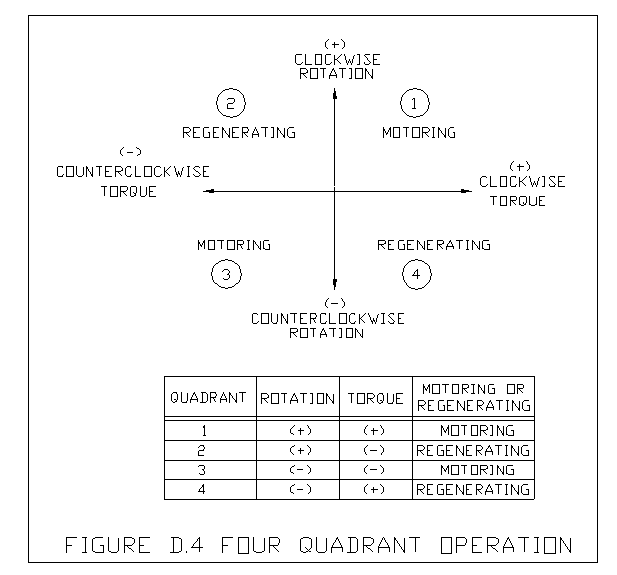 So with motoring operation, power is taken from the AC line and converted to produce work by the motor.  With regen operation, self generated power is taken from the motor and fed back to the AC line or energy dissipating “brake resistors” to produce negative or braking torque in the motor.  This function is useful when dealing with high inertia or overhauling motor loads.  With DC drives, regenerative capability also provides “solid state reversing”.  Without regeneration, DC rated contactors must be used for reversing.  Frequent reversing, even at low load levels, can cause short mechanical life expectancy on contactors.  With a regen drive, only a single contactor is recommended for “fail safe stopping”.

“Regen” capability in a DC drive requires a second power section and more control circuitry than in a non-regen type while most AC Inverter drives inherently include some regeneration capability.  Most lower HP rated AC drives also come with the “braking transistor” circuitry required for expanding regen capability with the addition of only the braking resistor.  Additionally, some AC drives may include “line regen” capability where the excess motor energy is fed back into the line instead of being dissipated across resistors.  DC regenerative drives can typically deliver higher continuous negative torque than an inverter drive using a braking resistor.  The inverter braking transistor and resistor continuous wattage ratings will determine the operating duty cycle.

Stay in touch with us